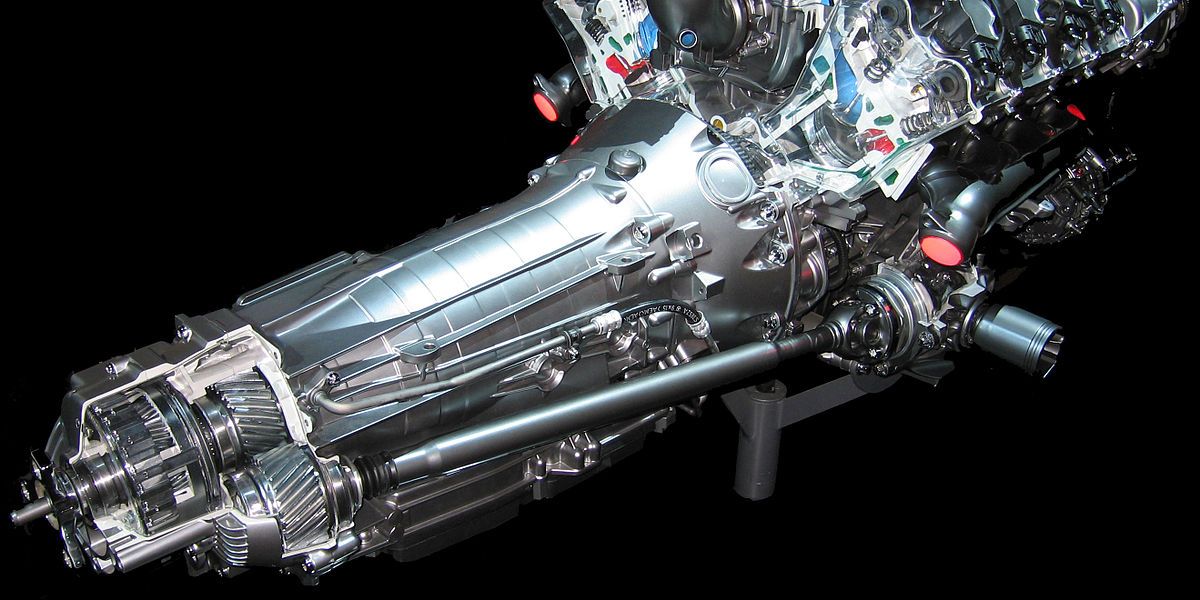 Most modern automatic gearboxes have a set of gearscalled a planetary or epicyclic gear train.
A planetary gear set consists of a central gear called the sun gear, an outer ring with internal gearteeth (also known as the annulus, or ring gear), and two or three gears known as planet gears that rotate between the sun and ring gears.
The drive train is coupled to a mechanism known as a torque converter, which acts as a fluid drive between the engine and transmission.

How a torque convertor works

Tthe centrifugal force acting on the hydraulic fluid via the impeller vanes transmits the torque, or turning effort, to the turbine.
The central reactor converts this turning effort by redirecting the flow of fluid back to the impeller to give higher torque at low speeds.
Once the engine speeds up and develops more power, the need for this torque amplification decreases and the reactor freewheels. The torque converter then acts as a fluid flywheel, connecting engine to gearbox.
The main components of a torque converter are shown in the diagram - the impeller, reactor (or stator) and turbine.
The smaller diagrams show the direction taken by the hydraulic fluid under centrifugal forces.
The same effect can also be achieved by locking the planet gears to the planet carrier.
Most automatic gearboxes have three forward speeds, and use two sets of epicyclic gears.
The locking sequences of the epicyclic gear train are achieved by hydraulic pressure operating brake bands or multi-plate clutches.
The bands are tightened round the ring gear to prevent it turning, and the clutches are used to lock the sun gear and planets.
The correct sequence of pressure build-up and release is controlled by a complex arrangement of hydraulic valves in conjunction with sensors that respond to engine load, road speed and throttle opening.
A mechanism linked to the throttle - known as a kickdown - is used to effect a change-down for rapid acceleration. When you press down the accelerator suddenly to its full extent, a lower gear is selected almost instantly.
Most automatic gearboxes have an override system so that the driver can hold a low gear as required.

The forward-drive clutch is engaged and the engine turns the first ring gear.
This causes the planet gears to drive the common sun gear in the opposite direction.
The second planet carrier is held by a brake band, so the planets drive the second ring gear and output shaft thus producing two reductions in the speed of the engine.

Drive two provides an intermediate ratio. The forward-drive clutch is engaged so the engine drives the first ring gear.
The sun gear is braked and the planet gears revolve around it. This causes the carrier to be driven in the same direction.
The carrier shaft is the output shaft, so one reduction is used. The second planet gears and their carrier freewheel

The forward-drive clutch is engaged and the engine drives the first ring gear.
The reverse clutch is also engaged, which locks the ring gear to the sun gear and both turn at the same speed.
The planet gears cannot turn, so the carrier also turns at engine speed. Output is taken from the carrier shaft, which turns at engine speed (direct drive).
Reverse
Reverse gear is usually marked 'R' on the selector. The forward-drive clutch is disengaged and the first ring gear freewheels.
The reverse clutch is engaged and the engine drives the sun gear.
The second planet carrier is braked and the sun gear causes the planet gears to drive the second ring gear in the opposite direction to give reverse drive.